S&RA split the membership up into the following groups, Games and Sports, Major Spectator Sport, Movement & Dance, Outdoor Pursuits and Water Recreation. This breakdown provides an eye opener on how many NGBs are representing the same, or similar, sports. S&RA compiled the sports club survey in 2011, 2013 and 2018 and the estimate for the total number of clubs in the UK remains stable at 151,000.

In the latest survey the number of clubs participating compared to 2013 was almost halved. The most recent survey, which remains the largest survey of sports clubs in the UK, shows the number of clubs participating down from 3,000 to 1600, that represents just over 0.01% of the estimated total. Amongst this small sample the biggest concern is finance.

To say the landscape across the UK is challenging, is an English understatement. With finance and access to facilities identified in the survey as significant issues for the sector there’s no guidance or best practice around these concerns. Although the number of participating adults, 120 per club average, and juniors 95, has increased since 2013 the average income is down to £35,648 whilst the expenditure is up £41,874.

The sector is characterised by being heavily run on a not for profit ethos with 87% of all clubs run as a non-profit club or a charity. It makes the imbalance between income and expenditure more of a concern for clubs that have been working in the same community for over a decade. Over 75% of all clubs surveyed had been in operation for over ten years. Part of the problem for sports clubs is the continuing decline in funding of local authorities which impacts on reduced local government resources both human and expertise as well as the money. In turns these reductions adds to the pressure on leisure contractors to generate more money, hence hire charges go up.

As Sport England embarks on delivering its new five year strategy Towards an Active Nation, there are important decisions to be made about who, how and what will enable them to meet their goals most effectively and efficiently. Sports clubs have the potential to play a vital part in delivering the strategy, and how Sport England supports these clubs, to be part of a sustainable sports sector, needs to be clearly understood.

The sport sector is tasked to make a wider contribution to the wellbeing of the nation, across five broad outcome areas: physical wellbeing, mental wellbeing, individual development, social and community development, economic development yet the S&RA survey found almost a third of clubs don’t have suitable equipment for disabled members.

Sport England’s remit was expanded to encompass children over five years of age, and there is a much stronger emphasis on activity rather than only sport, the next survey needs to reflect these changes. You can read the full report below. 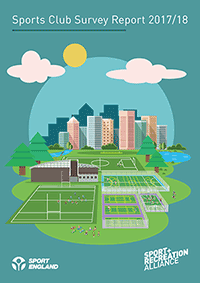